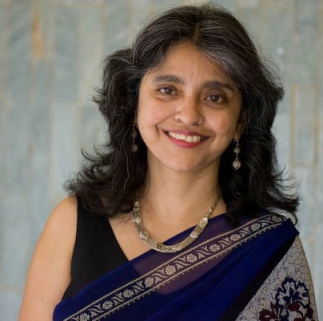 Work and family are the two most uplifting elements in Sri Lankan author Chandani Lokuge’s busy life. “I am not the most balanced person,” she laughs, “but I don’t think there is a conflict. I did my PhD after I got married and had my children. We have all grown together. I don’t think I could have one without the other, really.”

She believes the two main elements in her life enrich and inspire each other.

“I am uplifted. I reach for the stars with my books. When I am writing, I do it most of the time in the depth of the night, or with my family around me during the day.”

She applies a similar energy to motherhood. “My children, it’s the same kind of creative process. You have them and you hold them in your arms, you help them in their formative years and then you let them go. You enjoy your involvement by the way they are able to contribute, in such an enriching way, to the community.”

Lokuge grew up in Sri Lanka with her parents’ work literally all around her. “My brother and I remember books falling off shelves in our house. My mother was a high school principal and my father was in the education department, so it came quite naturally that I should have books instead of dolls.”

“I used to model myself on my mother quite a lot. She was a very good teacher and her students used to come to our house and have readings and they used to respect her so much,” she says.

Another influence was religion. “It was very strong, the role of religion in my upbringing. My mother, being a very devout Catholic, and my father being a strong, strong Buddhist. I’m glad I have two philosophies to believe in. I draw strength from each.”

It is this wider perspective, and wisdom from Buddhism, that she believes her adopted home of Australia could benefit from. ” Australia could be enriched by the philosophy and the spiritual side of it,” she says. “Peace for oneself and peace for the world. A kind of detachment from commercialism, a detachment from worldliness. I think that’s why Buddhism is gaining so much popularity in the country.”

She also credits much of her success to having moved to Australia, in 1987 as a commonwealth scholar.

” Australia has shaped me quite a lot in the way I think. There’s a lot more that is possible for me, as an individual. My writing has taken full flight in Australia.”

Lokuge thinks there are many similarities between Sri Lanka and Australia. “I think we share a lot of psychological characteristics: slightly laid back; interested in a good joke; generous and caring,” she explains.

Ultimately, nationality has little to do with her sense of self, she says. “Belonging does not mean belonging to a land or belonging to a country,” Lokuge says. “I think belonging means that you anchor your self-confidence within yourself.”

It is this theme of belonging and cultural identity which runs through her latest novel, Turtle Nest. Its protagonist, Aruni, is faced with such questions when she returns to Sri Lanka to find out about her mother’s life.

“That ability to reflect on your actions and have reached a maturity that is independent of everything and everyone,” Lokuge explains, “I don’t know if this is an ideal that can ever be reached, because I don’t think I’ve reached it yet.”